Sunshine on a Cloudy Day

Dylan took his brother's wallet to his new camp today.  He had hidden it in his lunch box.
He passed out $101 to all the kids there so they too could buy candy and coke in the vending machine.
When the owner saw him, he was able to recoup $60 of it..
Five year old Dylan said that he could not find his own wallet, so he just took his brother's...
Sigh...Dylan went to bed early...had to give his bro..his own dollar and 10 cents..
Trials of poor old grandma!!! lol 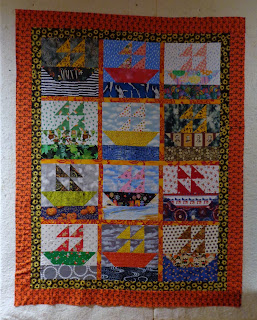 And, guess what came today in time to be washed and pieced so the quilt can be basted tomorrow night??
Thank you Cousin Ann...some sunshine on a cloudy day 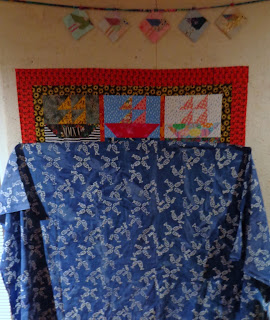 And, Sandy....back from a month teaching in China brought me this silk tidbit to inspire.. 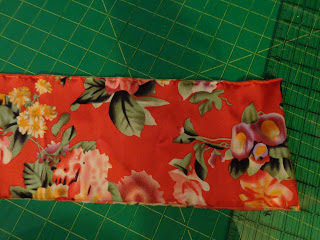 Oh that is SOO Funny!! guaranteed to be a legendary family story. Muggs quilt looks fabulous! a quilt of different seas sailed and weathers, just like life I guess, Hugs to Diane.

oh no, that wallet story would be funny if it hadn't cost so much money! Kids, they keep you on your toes!! You really are a wonder-gran to be bringing them up, my two girls exhaust me every single day. I love them to the moon and back, but they just exhaust me!!

I need to get on and cut some fabric today, but so far I am being lazy instead.