My mother said that the people who are the least likable need the most love...Not sayin...but here is a potholder for Dylan's 6:30 am bus driver...Guess she is not a morning person...lol 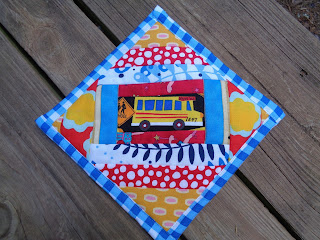 Coasters for the beloved school staff.. 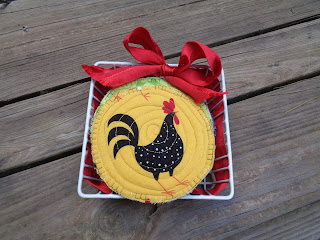 I made 15 so no one would be left out. ..all different 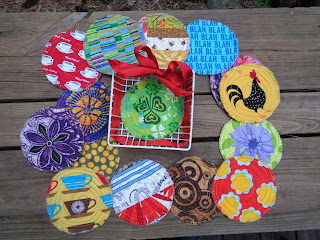 I am trying to be brave and strong and true..but it is not working out as planned.
Dear me...oh, dear me...
Got a letter in the mail that in one week they are taking away the Medicaid for the three children.No one answers the phone at social services.  They say I was non-compliant???
My guess is that the week after my husband died when I was all in a dither and hurting all over, they wanted me to go downtown for a court hearing for the children.
I just could not do this..no energy...all depleted from a funeral and a death and arthritis...Did they care???
Oh, no they did not and the state is taking it out on the three children.
Dear me.
And, then...my dear man's social security and pension is frozen as they try to work out the money that I will be getting...hmmmm...Do I need this???  Oh, no I do not.
All...says the queen of the whine!!!  Blah Blah Blah.
My daughter is now in Ireland with her man to funeral number two.  Mr. O'Quilt's ashes have gone home to Ireland and they will be interned there with the three other brothers who have died.
..It is too much for me.  Even though it is the right thing...emotionally...it is just too much.
And, now I cannot self medicate with fabric sales..Budget time...again...
So trying to get a grip..I miss him so much.  I think it is just a mistake...a nightmare...but , no..it is true.
And, how did it go down 6 weeks ago??
He had his Trilogy breathing mask on.  His chest was going up and down so we thought he was resting.
When the Hospice nurse came and took off the mask...He was gone.
The machine was making the chest go up and down.

Gone.
Guess I am obsessing...Going to bed now with Rin Tin Tin and Garfield.

Finally I got my hair cut.  She said that I had more grey hair than ever before...Really???
Thank you...
TBTG my group came tonight.  I think that they love me anyway!!!
And, thank you dear readers for humoring me..
Tomorrow is another day.

PS...Dylan fell out of bed again.  I think I want to be like Dylan...
Nothing bothers him at all....Wakes up with a smile each morning. 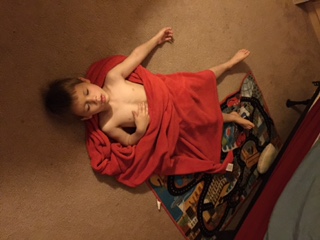 I don't know how you are dealing with everything right now. You have been dealt too much. I pray for you everyday. Hopefully in a few weeks the medicare issue will be sorted out and your checks will start arriving. Things have to get better. You have had more than your share of heartache. June will be your month for everything to sort out and for some sense of normalcy to come into your life.

I am so sorry :( Things see to just pile on some days, you are getting more than your fair share. Do the children have a social worker that can help sort things out? I don't know how you do what you do!!!! Keep fighting, keep smiling, and keep sewing. Hugs and prayers

Oh, how I hate it when BIG government determines that paperwork is more important than people! I am sure you feel like you are beating your head against a brick wall, but perhaps you can manage a trip in person to the Social Security office and let them see you and hear you and make some quicker decisions.

Especially when your heart is breaking all over again while your daughter is in Ireland, with your steps.

Hang on. Your sweet gifts for the children to share are a blessing to them and to you and to the ones who receive them. It's a good thing to do. You will have more thoughtful ideas to give you strength for the next days to come.

Uh, since you're not shopping today, why don't you sort through a favorite fabric stash and just fondle it and dream about it for awhile? sometimes that's enough to give a few spurts of energy :) big hugs

Oh boy, you are having a Bad Time. I'm so sorry. This is more than you should have to deal with. But, you can do this. Baby steps. And don't be afraid to ask someone for help!

So glad you are getting in some sewing therapy! The coasters are so cute and will bring joy to those receiving!

Yes, I agree with the above comment. Go play with and pet some of that fabric that previous shopping therapy netted you. Just feeling, smelling and dreaming will help! *grin*

Sending you hugs, and strength to get through. xxoooxxx