Charlotte, North Carolina is often referred to as the Queen City.
(Nicknamed the Queen City, Charlotte and its resident county are named in honor of Charlotte of Mecklenburg-Strelitz, who had become queen consort of Great Britain the year before the city's founding.)


So we have named our daytime bee, The Queen Bee!!!

I almost did not go on Monday as I had preferred to stay home and wallow...but...remembering my latest slogan...."Just Show Up"..I went...and had the very best time ever!.  A big thanks to hostess Debra for making it so special.  Check out her quilting room...Believe me, I could never be Debra...so very organized...:) 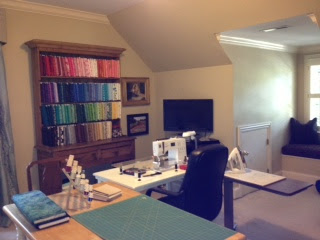 Her design wall reflects her loves...applique, and of course Elvis. 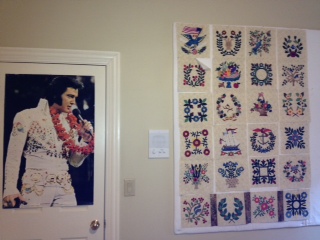 She was at an Elvis concert at age 18 where she caught this scarf...right off the dear  man's neck...love..:) 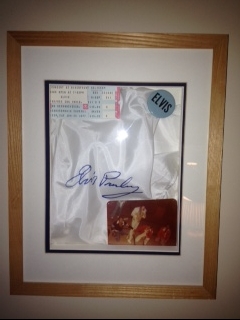 Served in her E-bay dish...hummus with chopped cucumbers and Feta...so much to love at Debra's house.. 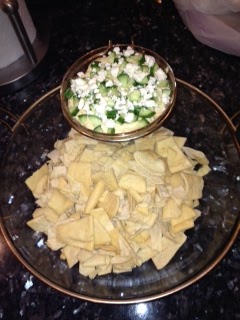 Karen's show and tell...A brilliant quilt...latticed and backed with the softest flannel.  And filled with scraps that I recognized from my own stash...
Once I was fed up with so many scraps that I gave them to Karen...that was the best idea..... 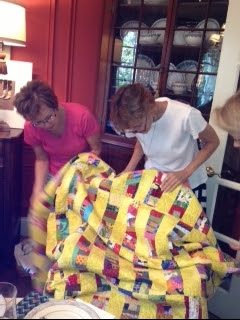 Monday was a very happy day.
Posted by O'Quilts at 9:54 PM

A good day indeed. That scarf is a hoot - and a great piece of history.
love the sewing room and the dip looks yummy!

Thanks for the sweet comments AND the wonderful scraps!!! I'm craving some more hummus. The cucumbers and feta on top made it perfect.

I love it -- Just Show Up! I needed to hear that myself the last few months, me, I wallowed.
So glad you had a good day. I really want to do a scrap quilt like that one.

Good on you for Just Showing Up. Looks like a great time with sewing friends. A real scarf from Elvis's shoulder, I would have fainted!!! How fun to see your scraps used in such a fabulous quilt. Mmm I feel like eating dip now. :)