House bound on Snow Days..
Some of us sew...Just the next border around a finished applique...from where, I forgot. 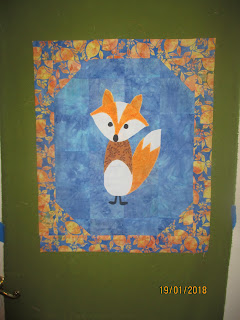 Cold and beautiful, our front yard.. 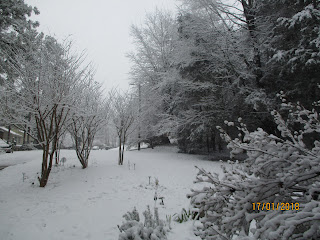 Colder and more beautiful, our back yard. 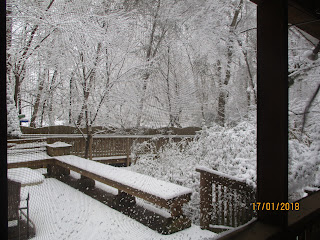 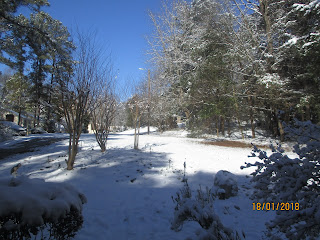 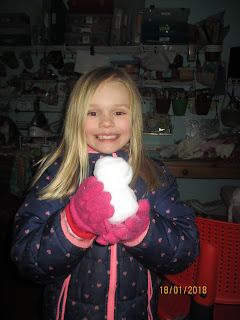 Some of us sleep 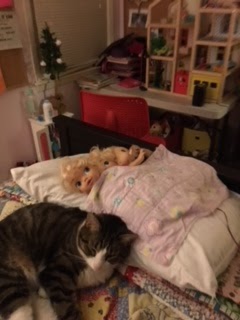 Warming up in front of the fake fire. 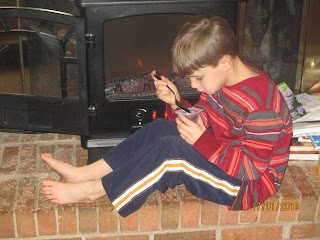 A one night sleepover that turned into 3 nights...OMG
Old Grandma made a dozen scrambled eggs and 100 pancakes..or 101!!
The next day, she made French toast from a loaf and a half  of bread.
Ice cream and yogurt and fruit smoothies.added to the treat. 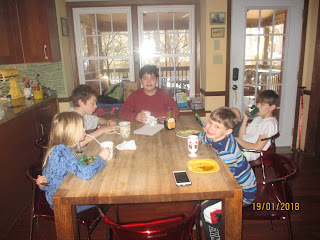 Stitch is so fickle.  He tells Lynsey that he is her cat.
He tells me that  he is the sewing room cat. 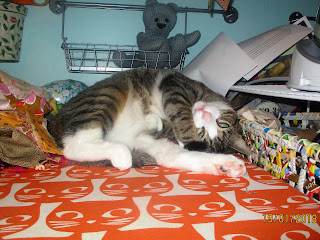 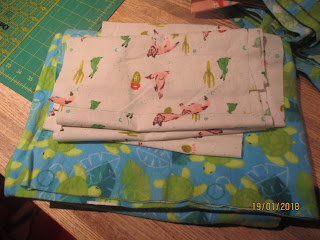 I am trying to put my grief in my pocket.
Alas, I am trying to get a life.
Snow meant no school.
No school meant Grandma  had to cancel her life because of childcare.
Snow  meant caring for 5 children instead of 3.
It also meant tons of fun and laughter for them and me.

Child free for the weekend, I am planning on going to the Guild Sit and Sew.
Preparing now for pillowcases and four patches.
Making myself go is part of my plan.
I would love to sleep the weekend away, but just gotta get out with my peeps.

Things I teach my grands....
The love of forgiveness.
We all make mistakes...and we all want to be forgiven.
Accepting people as they are. not trying to change them.
Hitting.  We do not hit children in this family and
children do not hit adults nor other children.
Lying...We are tempted...especially when we might get into trouble for a mistake or two.
But if we tell the truth around  here, the discipline is so much less
and we love ourselves so  much more.
Not talking bad about others when they have made a  mistake...back to the forgiveness.
We do not have to go to church for these lessons from God.
Control...we can only control ourselves.
Life...live in the day.
Life again...give to others.
Humming...Thank you WS.
The God thing...each person has to  make up their own minds
Believing is a gift...but it is a personal gift.
It has to be role modeled...that of course is the biggest challenge.
Doing the best I can here... 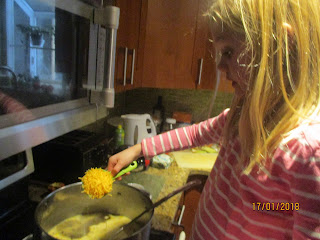 The making of corn chowder...
Fretting on Thursday, scrounging around for what to serve my brood...
I told Lynsey that everyone was on the computers so I could not find a recipe for the corn chowder.
In less than a second...my 8 year old grand was beside me with  her I-pad.
Siri, she said...please get us a recipe for corn chowder...and so it began..
Lynsey said that Uncle Brian gave her a Siri who is a man with an Irish accent.
She loves her Siri...he helps her with so much.
This old grandma keeps getting blown away.
From what had started as a perceived crisis, ended as a gift..
I should'a known...xo
Posted by O'Quilts at 11:45 PM

What a delightful and lovely post! You do such an excellent job of catching the moments and the emotions and letting us glimpse a picture of your world and family. Good life lessons and lovely scenery. The quilt is so happy and fun. The beauty and the angst. well done.