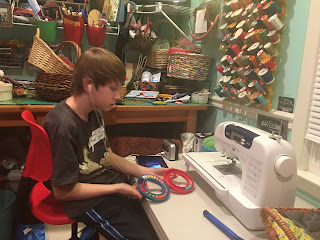 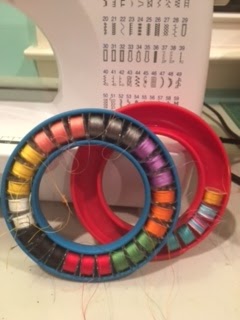 We now celebrate our dear Evan
Teachers report that today he has re-taken his exams and done very well.
We all freaked when our A student failed two finals...
He just did not know how to study.
Now I am getting emails on how smart, such a good worker...etc..
Bursting with pride.
Tonight, he fretted that he...does not like the "no weekday " electronic rule!
All the children take advantage of Grandma's rules when Mommy visits....
including Mommy.
I gave Evan a consequence of going to bed 30 min early tonight,
or missing the electronics on Friday night.
He chose the former...smart boy.
He was at odds.with "nothing to do".
Alas..after much moping...he decided to fill bobbins for me and use the radio to help him.
He took the radio from up stairs, plugged it into his I-pad, attached his earplugs to the I-pad,
The radio was plugged in to the wall.
The I-pad was plugged into the radio.
The earplugs were plugged into the I-pad
The earplugs were plugged into the boy....for music....and..
Evan was plugged into his.sewing machine.
Quite a sight...
My Grandboy WOUND 31 bobbins for me on his own sewing machine as I sat at the computer.
He chose what  colors a quilter should need.
So proud..so happy...so helpful.
OOPs...time gone by so fast missing bedtime
Old grandma was totally happy with her blind eye.
Time well spent.

Big problem..
Evan said that he could not sew because I dumped all my stuff on his sewing table!!
Really, who would do that.????
Now...his table is all clean, bobbins all wound and neat.
and MY table,, MY sewing room MY fabric...is big awful mess..
Grandma promised not to mess HIS table again....
I so wish I had  bought more chocolate ice cream.
I just might have promised the impossible. 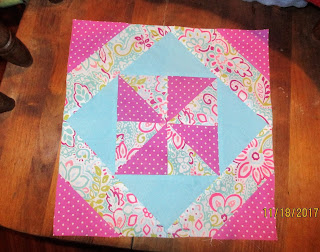 Another block made for a friend...It is called 30's Pinwheel in a square!
Fun and easy...

, I am auditioning more choices for my Civil War sampler.
I hate what I had planned before..
I see this strip is too dark.
Sometime it takes putting it out there to see the mistake,
And to share the process with all the world.. to see. 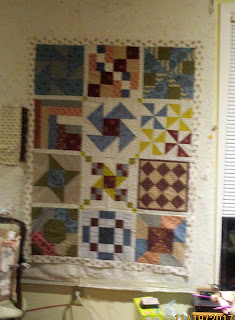 When my Dear Man died, I took his "hospital" room for my second quilting room
I thought, for sure that I would have so much space..
I would  be tidy forever.
NOT!!!
God help me, I need organizational help.(among other things)

The spring in Charlotte...the summer for Lynsey
The fall for my love....no one knowing the winter was soon.
It is Time to Say Goodbye 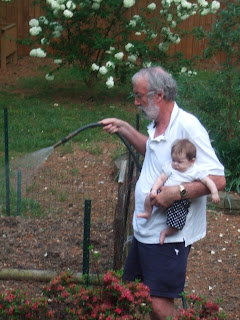 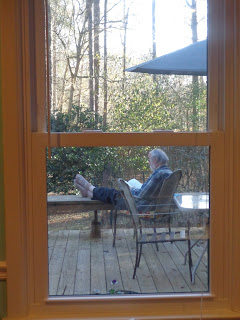 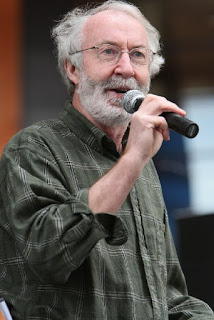 Mother, with your quick wit and your beloved words, your big heart of love.
I never knew that you were old.
This picture was you!!  Yes, you....coming home from lunch bunch in February.
You fell from your wheelchair in May, the day before your birthday.
Maybe 93 was old for some, but not for my mother. 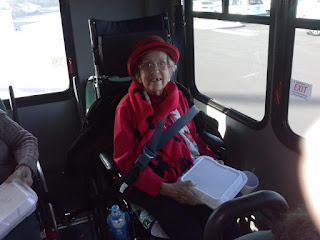 Life as I knew it, was shattered in an instant.
The Prayer

Then...The Rose
The pain of loss and the comfort of grace..
Always with me every second of every day.

Labels: evan and bobbins, Fintan, memories, My mother, The Prayer, The Rose, Time to say goodbye

You do have a wonderful grandson in Evan, I should love someone to sit and wind my bobbins! Would he also like to come and tidy my sewing table? You must be pleased that he did eventually pass his exams.
Now your 30"s Pinwheel in a Square is a cute block, I could see lots of these sashed as a quilt, perhaps I could put it on my list! Lovely photos of your husband Diane, and your Mother, treasured memories.