The Crabby One Without a Car

Playing with rope to keep my sanity. 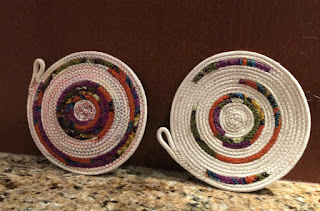 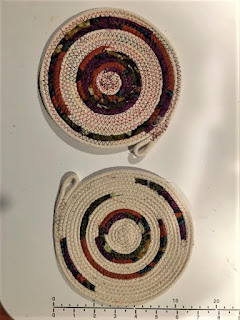 I used African prints...which I will never do again...I mean the real deal waxed prints.
They did not show the affect that I wanted and they frayed something awful..
At first I liked the busy one, but at the end, it was the one with negative space that I preferred.
I could not stop... I guess I thought if the coasters relaxed me...a bowl would be even better! 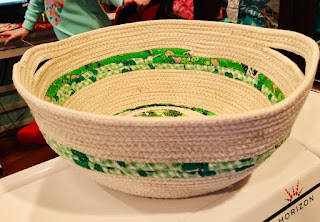 The other day, my son found a box of what he called, "potholders"!! After all these years of being my son, one would think that he not be uninitiated!!  Grrr.
Instead of potholders, it was full of left over blocks from my daughter...back in the day. 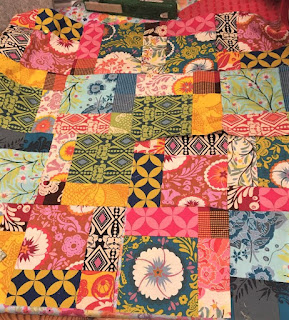 I put the blocks together...only to find out I had made a mistake.
What annoys me is the two center green blocks together...
It irritates me to have made an error, but not enough to take it out.
Whatever child it goes to...guaranteed...will not be bothered.

I hate being so isolated without a car...We extroverts get our energy from being with people.
Crabby McNasty...here...
However, I would have been in a worse state if I had paid $300 a week to rent one.
Main problema here...I cannot get away from myself.
I am going to set up some time away, if my son can chill for awhile.
I am between a rock and a hard place...He needs my car to go look for cars.
And, he needs to continue to do some jobs in order to pay for the car..

A nice sunny spring day would help!!!
Alas, it is still January.
I have been trying to organize my sewing room...hopefully to find the missings.
Posted by O'Quilts at 10:37 PM

Maybe I will try rope instead of wine and chocolate some time, though winter brings out my inner grouch. A sunny day and, car or no car, things will seems better. In the meantime, I like your rope makings and the quilt. I think at least those two greens are in the centre, so it looks deliberate.

I really like your rope coasters and bowl. A friend recently gave me a hot mat made with this technique and I love it. Need to give it a try myself.

I gave away some of that fraying when you look at it fabric simply so I wouldn't be tempted to use it. It was beautiful, but the fraying was too frustrating. I like your coasters and bowl, too. You have a knack! Keep going. :)

Your rope baskets are superb! Sorry to hear you are without a car on some days but you can at least get on with your sewing room organisation.