The Road toward Acceptance

This is the picture I had to put away of my dear man.  It was so him...officiating music at the St Paddy's Day Parade.  Now, it seems like an antique obit clipping.
Not him at all...no bright blue eyes..nothing real. All gone.
I cannot find him. 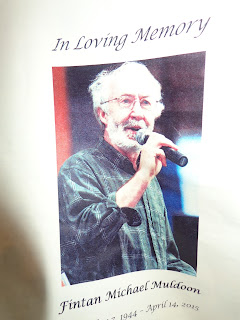 I always wanted to be like my husband.  I wanted to be easy going like him, thoughtful and kind like he was, I wanted to be able to say no to chocolate and run like the wind,
while keeping my emotions in check.
But, I could never be him, only be me with my set of stuff, flying by the seat of my pants.
.  Then ALS hit him.  No fair.
I was a bit jealous of Johanna too...she could live on bits of salads alone and seemed to have it all.
Then Pancreatic cancer took her out in 8 months. No fair.

The new me has more acceptance.  Trying to work on Gratitude only.
I think that sitting in my recliner with Oreos and quilting books is going to be just fine.

Stephanie has known grief.  When her middle son was 15, he was lined against the wall and shot by a gang.
Steph couldn't leave the house for months. That was 20 years ago.
I think that when I cry, she understands.  It also reminds her of such sadness.
Stephanie is family.
We call Ms Stephanie, Stephanie Muldoon, but she insists on keeping her own name.
She is like that.
Here she is doing make-up with the bug catcher and wild man. 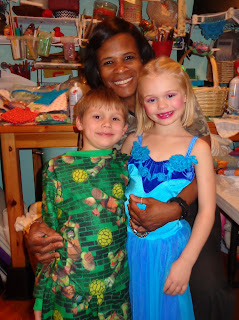 I have not been out of the house in three days with this asthma stuff.  Tonight we were out of
THE  laundry detergent...a terrible thing with three little children.
I walked into Harris Teeter and promptly  had a huge asthma attack.
coughing until all the customers ran screaming for flu shots..OMG

I am going to make a birthday present tonight...that should get me going.
Going to make it fun.
Posted by O'Quilts at 7:05 PM

I love your thoughts in this blog. You have a sense of humor about everyone getting a flu shot.

There is heartache & grief & pain in every life. All of us soldiering on. Love of family & friends keep us going.
Take care of yourself.

Aw, Diane, a lovely post today. I sewed up a whole quilt today, in one morning and afternoon. It's a small one for a toy doll. It's kept my mind calm, it's just in the washing machine now. It's full of ghastly sugary pinks and lilacs, just what my daughters love!! I'm nervously counting down to the birth now!

You need to be more careful of your health. I hope your asthma is better very quickly. You need to get to your quilting group.
Hugs

Doing thing we love and Gratitude goes along way to find renewed happiness.

I started with tears and ended with a smile and a little bit of a chuckle...you did that!